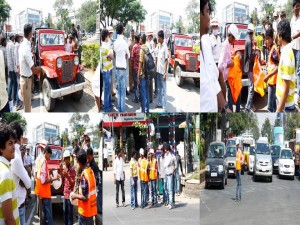 Many people consider that gifting their child a costly bike much before the legal driving age is simply the best gift ever. Vaada had come across an incident in the year 2012, which proves to be a consequence of such attitude of parents. It was near the Jubilee Hills check post where a group of four to five youngsters, in an open jeep and who were jumping signal. On being stopped by the traffic policeman on duty, they showed a gun to him, warning him to keep away for his life. Luckily, Vaada team happened to cross by the same road and witnessed the scenario. By various means, the boys were caught and it was noticed they were under 15 year old guys, and to amazement the gun was simply a toy gun. The young boys, as per the rules were being taken to the police station. Vaada, in order to make the youngsters realize their mistakes spoke to the authorities to give them a two hour traffic regulation task. As the boys had only two options, either to go to jail for violating traffic rules or perform the task, the though latter would be an easier choice. Being managing the traffic for about two hours, accompanied by the Vaada team as well, the young realized how difficult it is to manage the traffic. After they realized and confessed that what they had done was against the law, they were taken to the police station for further formalities.

By this, Vaada wants to attract public’s eye on parent’s consideration of gifting their children vehicles before the legal driver’s age. It is important for parents to understand that gifting children vehicles much earlier than their deserving age may not only be risky but also against the law. By gifting their children a legal license at the right time, they may not only keep their children safe as well as spread safety among the society. Hence, Vaada concludes by the message gift your child not a costly vehicle, but a legal license.