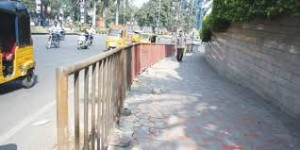 The alarming chain incidents and eve teasing cases on roads now need a stringent solution.Considering the fear women pedestrians carry while walking, Vaada Foundation appealed to the government to make footpaths more safe and sound for women pedestrians. Vaada Foundation proposed to the government authority in charged to advice the respective civic bodies to construct footpaths with railings. As railings act as a lock up source to the footpaths, there is no way out for such incidents. Moreover, Vaada Foundation also requested that every road must facilitate such footpaths. It is the lack of such footpaths that force people to walk on the road and therefore making it easy for miscreants to commit and quickly get away with the crime.

At the same time, Vaada Foundation also believes that awareness should be created among pedestrians to walk in the opposite direction to the traffic. Doing so will avoid such attacks, gradually bring down such case numbers to a minimal level.