Living the profession of her husband 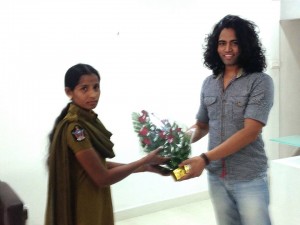 The previous year, Ramulu, a home guard in the Hyderabad Traffic Police died in a road accident. Hewas survived by his wife and 1-year old daughter. Ramulu’s death brought in a cut down the family’s only earning hands. After the conversation with the then DCP Mr Ashok Kumar sir, Vaada Foundation decided to stretch sympathy and support to Ramulu’s widow, Yashoda. Vaada Foundation then supported Yashoda by giving her an honorarium of Rs 50,000/- for her immediate needs. Then,Vaada Foundation also realized the Home guards were not insured. Vaada Foundation’s efforts to get the home guards insured succeed on a vast scale. Last year, over 700 home guards got insured.