A class example of the hard-working Hyderabad Traffic Police 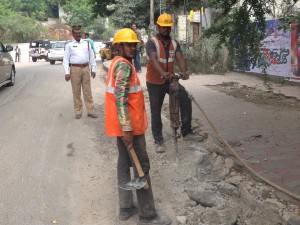 These days you may notice how roads are being used for illegal parking occupied by shop owners.One of such footpaths at Jubilee Hills, Road No 10 was used for illegal parking, which Vaada Foundation noticed and reported to the Hyderabad Traffic Police for immediate action. The shop owners had built ramps on the footpath which was a blocking traffic and creating a nuisance. Vaada Foundation greatly respects Inspector Devender who took an action immediately, even though it was outside the boundaries of his role. Within the next hour, he got the ramps demolished and cleared the area. We, the general public, do not normally associate such proactive behaviour with the Traffic Police, but this is a classic example of how hard-working and dedicated they are. Vaada respects the efforts made by the HTP on duty and also shows extreme honour towards Inspector Devender, without whom, may be, the process just couldn’t meet its success soon.